Practitioners' Profiles: The Firefighters of Veoci 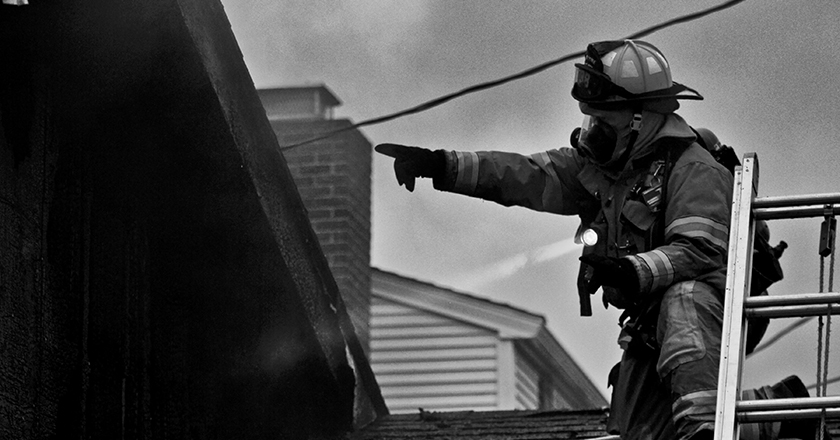 John Duddy and Rich Smith are subject matter experts in emergency management and response. They’re not just Veoci team members, but first responders who gear up and run towards a crisis while everyone else heads in the opposite direction. They are firefighters: brave individuals who frequently put their lives on the line to protect the personal safety of complete strangers.

John and Rich both serve as volunteer firefighters at the Old Lyme Fire Department in Connecticut. John got his start in the fire department when he was 16 years old; Rich was only 15 when he started. From a young age, both men expressed interest in the field. John had a firefighter action figure and a father and grandfather who were both firefighters. Rich looked up to his older sister’s friends who were firefighters.

John Duddy: Taking the Good with the Bad

As a volunteer firefighter, John Duddy knows something about dedication. In addition to his full time job at Veoci and his beautiful family complete with a wife and two children, John spends his nights, weekends, and early morning hours responding to incidents with the Old Lyme Fire Department.

At times you can hear his radio blowing up as sirens race to an emergency, or he’ll come in with tired eyes because he spent the night on the side of the highway after being called to a response.

Despite being a fireman at heart, John is a family man first. His family has always been supportive of his choice to be a first responder, in fact his daughter is now becoming a firefighter herself, but he always makes sure to prioritize appropriately. In John’s words, as a volunteer “you have to make sure your home is your legacy first.”

Family seems to be a common theme in John’s life. He discusses how the men and women on his crew have grown to be like family to him. He has stood by his fellow firefighters as both a groomsman and a pall bearer. They’re also the guys he calls when he wants to have a beer and look at the new fence he just installed. This unique bond is based on trust, and it perseveres through good, bad, and everything in between.

And there are plenty of goods and bads that come with being a firefighter. Fortunately, the good comes in abundance. For one, John describes driving the firetruck as “pretty cool,” but he also loves helping people in their time of need. He finds it especially fulfilling when people remember him and what he did for them.

For example, after Fire Prevention Day at his daughter’s school, children around town started recognizing him in public places, like Subway, as “The Firefighter.” He’s also immensely enjoys mentoring young firefighters that join the crew.

However, despite the camaraderie and positive impact you can make as a firefighter, there’s no denying that the job comes with tragedy. Firefighters have to deal with tragic situations and see firsthand how tragedy affects families and individuals. They see things that the majority of the population will never witness. John summed it up nicely when he quoted his friend, a retired FDNY firefighter, saying, “I wish my mind could forget what my eyes have seen.”

Once you’ve seen tragedy so up close though, you begin to put things into a different perspective. John says that things that happen in everyday life that no longer seem like a big deal in comparison to what he’s witnessed.

Rich Smith: Return to the Firehouse

Rich recently got back into firefighting after rescuing someone who fell through the ice at a lake near his house. His wife encouraged him to rejoin the department, knowing how much he enjoyed his work as a firefighter.

Rich’s family has always been instrumental in his success as a firefighter. Before he got his driver’s license, his father used to drive him to calls in the middle of the night (although there were some nights he turned off Rich’s pager to let him sleep).

But being a firefighter can also take a toll on your family. Rich has three small children, and every time he leaves on a call his oldest always says, "Daddy don't go.” Despite his wife being incredibly supportive of his decision to rejoin the fire department, she still has to shoulder the burden of caring for their children when Rich is gone and worrying about him when he responds to a fire.

It may be challenging to mediate between having a young family and being a volunteer firefighter, but Rich is driven by his desire to help people. He says that lately he’s really enjoyed seeing the recognition and admiration that members of the community have for firefighters.

On at least two recent occasions, residents have stopped at motor vehicle accidents to give Rich water as an expression of their support and thanks. But above all that, Rich says his absolute favorite part of being a firefighter is the camaraderie.

Rich says the camaraderie is tough to describe, but that it’s likely only rivaled by the relationships formed in the military. This is likely because first responders rely on each other to save lives and stay alive. It’s a bond that is very difficult to break.

Rich has had many experiences that warrant such a bond. He worked for FEMA for three years in Southeast Louisiana after Hurricanes Katrina and Rita hit. He talks about the devastation he witnessed and how it can have a numbing effect. The hardest part is admitting when you need help, he says.

As a firefighter, Rich has some very memorable experiences. For one, when he was 17 years old he responded to an accident that required a Lifestar. He recalls being in the helicopter as it landed in his best friend’s front house at 3:00AM. Rich also remembers being called to treat a gunshot victim when he was 16. At the time he was just observing as an EMT, but the officers asked him to leap into action. Fortunately, the ambulance arrived minutes later.

There’s no denying that Rich has seen a lot in his career as a firefighter, but he continues to don his fire gear and leap into action when disaster strikes.

Taking on the Field of Emergency Management

It’s obvious that John and Rich both love being firefighters, despite some of the harder aspects of the job. From their experiences, they have learned a thing or two about emergency management such as the need to be flexible and adapt on the fly, the importance of teamwork, and being accountable.

Rich discusses how the fire department often ends up being the go-to for help when you’re not sure what else to do. He equates this to emergency management saying that emergency managers are always dealing with something they haven't encountered before. The key is to rely on the foundational knowledge built over the years and to stick to the principles that guide response.

Now, both men not only serve as first responders, but they work full time for an emergency management software platform. When asked how working for Veoci has impacted their role as firefighters, and vice versa, John explained that he understands the processes because he’s been there. He “can talk the talk because [he] walks the walk.” He’s been in the shoes of emergency managers when there was nothing like Veoci out there.

Rich discussed how Veoci has so much to offer the fire service – the possibilities are endless to streamline record keeping, help enhance safety checks, and reduce paperwork and workload. The tough part is getting fire department's to realize that potential since many departments are adhered to the old way of doing things. He also talks about how Veoci can learn from the fire service and their experiences with emergency management.

The Lives of First Responders

Overall, Rich and John are seemingly normal guys with a very special set of skills. They race towards disaster, and do what it takes to keep their community safe. Being firefighters has helped them form lasting bonds and learn how to constantly expect the unexpected. They are first responders who know what it takes to respond to a crisis and understand the complexities of emergency management.

Read about Mark Demski's 30+ years in public safety in this profile.

The image used for this blog is an image of John Duddy responding to a call in 2017.