Why So Quiet? The 21st Century Emergency Operations Center 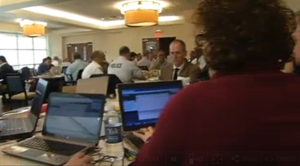 Last week Yale University and the City of New Haven completed a joint four-day Disaster Response training exercise for a “Active Shooter Mass Casualty Incident Drill” in conjunction with FEMA. The exercise was run by the Emergency Management Institute (EMI) as part of Course L930 of the Community-specific Integrated Emergency Management Curriculum (IEMC). FEMA runs about six of these at requestor locations each year.

The exercise was conducted in three rooms physically isolated from each other with, at its peak, 160 participants. Senior management from the University Provost to the City's Mayor stopped by. Auxiliary organizations - Yale New Haven Hospital, American Medical Response (AMR) and others participated as well. Each of the participants had internet-connected devices, and used Veoci as the primary response communications application throughout the drill.

The overwhelming majority of official information exchange took place using the Veoci platform via well-known input/output methods – typing and reading. One surprising question the the FEMA experts asked at the end of the second day of the drill was “Why so quiet?” This was the second time we had heard this comment.

The first time was in the City of New Haven's Emergency Operations Center (EOC) during Hurricane Sandy. People in the room noticed how quiet the EOC was during that response as compared to similar activations in the past. During both the Hurricane Sandy response and the Yale-New Haven FEMA training exercise, about fifty people were in each room on average, a big enough number to warrant serious concerns about cross conversations, escalating volume, and general verbal chaos. But the situations never got out of hand - everyone of the participants was on a notebook, PC, tablet or PDA and logged into and using Veoci, using it to communicate and collaborate through organized, efficient channels. There are also several factors that drive verbal exchanges:

Further, we are more clear when we write than when we speak – speaking is done with much less pre-mediation or editing. In fast-paced situations with lots of activity, when trying to verbally relate a point, ask a question, or reply to something, ironically enough we end up doing a lot more talking than is necessary. Add this all together and you end up with much more speaking taking place per person than is necessary, more time and effort put into the mechanics of communication rather than actual communication. In contrast, using visual interfaces for exchanging messages leads to clearer communication as the senders can (re)view and edit messages to eliminate ambiguity and provide clarifications that are recorded and can be consumed by everyone later on. In other words, having everything written down and recorded encourages accuracy and lets people go back to what was communicated earlier and be aware of many more communications than just the one that you may or may not have heard correctly moments, minutes, or hours ago. Even more complex is attempting to explain a situation verbally in contrast to sending a photo.

Jet plane at one mile 90 Diesel truck at 50 ft. 80 Conversation in an office 70 Conversation at Home 60 Library 40 At City of New Haven's EOC during Hurricane Sandy, over 5,000 messages were exchanged for an estimated peak volume of approximately 400 messages per hour. Estimating the average message at 50 words – about a minute of typing - gives an exchange of 20,000 words per hour. These 20,000 words never needed to be uttered out loud.Mode

Typing 50 Talking/Listening 100-150 Reading 250-300 As an estimate using speech at 125 words per minute, 20,000 words translates to 160 minutes of talking per hour. That would mean, for example, that 2 to 3 people would have been talking continuously during this period if they were to verbalize what was being typed. As a rough (admittedly unscientific) estimate, we can conjecture that inherent problems with spoken communication in active situations with many voices can potentially double the amount of words spoken per person and increase the sound level by eight decibels. EOC Decibels

It's not surprising that the FEMA experts running the exercise were worried about the reduced noise level; they were used to a very loud EOC, the equivalent of a diesel truck nearby, and what they found here was relative pin-drop silence; with fewer decibels and less repetition, communication became clear. As it turned out, reducing the noise, both literally and figuratively, made the response more accurate, collaborative, and easier to get through.