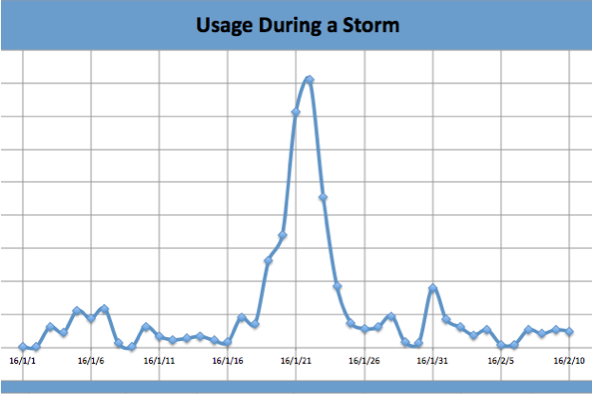 When it comes to emergencies, we know to expect the unexpected. We can do our best to predict the weather but we can never know for sure just how bad a disaster will be, or how many people will be needed in the effort to respond to and recover from it. This is why every system needs to prepare for the maximum capacity of users, and be able to handle the swift spike in users at any given time. During Winter Storm Jonas last month, our usage shot up by 900%.

Thanks to the cloud, this was no problem. Cities using EOC systems with onsite servers struggle with paying way too much to ensure that they can independently handle the maximum capacity of users with excess infrastructure that goes unused most of the time. With a cloud-based system, all participating cities are pooled in the cloud, with the expectation that only one or a few of them will peak at any given time. And during extraordinary events, when it’s likely that quite a few organizations will be utilizing the system, adding servers and increasing capacity is just a matter of flipping a few switches.

When things settle down again and demand goes down, dialling back is just as easy. Waste not, want not. Consider the following hypothetical example: 10 cities utilize the system.  Each of these cities has a potential peak of 1000 users logged in at the same time during a crisis.  On an average day, though, only 100 of their users are logged in.