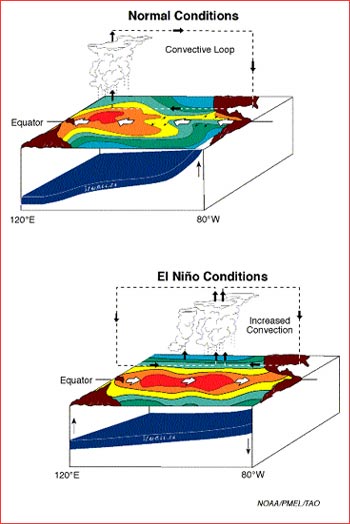 If you’ve spoken to a Californian lately or have been following the exceedingly weather-related news from the West Coast, you’ve heard about El Niño. El Niño has emergency managers along the West Coast worried. They are preparing for floods and landslides. What is El Niño? The name El Niño comes from Peruvian fishermen who noticed a rise in the water temperature of waters off their coast every few years; as it occurred around Christmas, they give it the name El Niño, or the Christ child.

In simple terms, during El Niño, the trade winds that usually move from east to west across the Pacific stall, and with it the flow of surface water from east to west that is pushed by those winds also slows (the same force of the wind makes the water level at the western edge of the Pacific about a foot and a half higher than on the South American edge). Normally, the westward flow of the surface water is replenished by colder water from the lower depths. During El Niño, this upwelling of cold water also slows or stops and the temperature of the ocean on the coast of South America begins to rise. This increase in temperature can be as high as 4°F.   While the exact phenomenology of what is the cause and what is effect of the observed changes is not yet understood, El Niño has been correlated with changes in weather patterns across the world. The best predictions of the effect of El Niño are the observed correlations of disturbed off-normal weather patterns with the measured El Niño temperatures.

The El Niño temperature measurements show much variation – there have been severe El Niño  and not so severe ones- with the effects also ranging from severe to quite minor. While El Niño  occurs every five to seven years, the last major temperature increase was noted in 1997-98, with it came severe rains in California that led to mud slides, flooding and 17 deaths. This year, the El Niño temperatures are trending even higher than those in 1997-98. By December, scientist extrapolate record high El Niño temperatures. As per the observed correlation, California is right to expect severe storms and rain.

A study from University of Minnesota and Woods Hole Oceanographic Institute researchers showed the current drought is California's worst in at least 1,200 years. The melting snow on the Sierra Nevada range provides nearly a third of the state’s water supply. With reduced precipitation, the snow cover on the range has been the smallest in 500 years leaving California with nearly no rain and now no snow on the mountains to melt. As a result, the land is parched, bone dry and hardened. The low moisture content on the forests has led to forest fires that have destroyed over a hundred thousand acres and laid them bare. [caption id="attachment_1722" align="alignright" width="300"]

The most alarming part now is that when the rain storms that correlate with El Niño show up, the rain will be falling on hard soil and running off with a much smaller fraction than normal getting absorbed and making its way down to the aquifers. This is three fold disaster: first, the heavily increased flow leads to floods, next, the wet soil above dry soil is a recipe for landslides, and thirdly, even with a lot of rainfall, very little replenishes the underground water system.

The forest fires don’t help either – the denuded land makes it easy for the soil to wash down the mountain slopes with mud flows and clog the rivers. As we talk to our customers on the California coast, they are all preparing for the arrival of the rain storms of El Niño. In our next blog we will talk about the striking similarity of this coming El Niño water temperature increases with those of the destructive past El Niños.