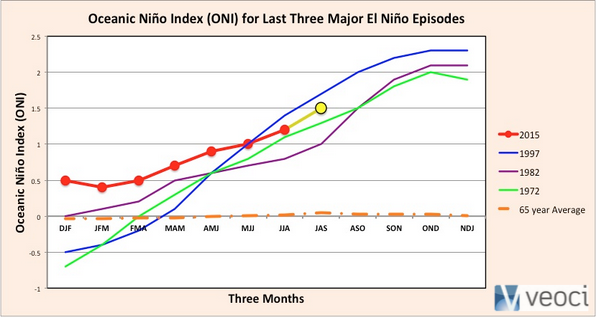 Our latest update (the yellow dot on the graph below) on El Niño from NOAA confirms earlier concerns; 2015-16 is going to be an extreme El Niño year and may equal or even exceed the devastation from the 1997-98 season.

Much of what may happen is predictable and is based on the topography and drainage of the land. The areas that typically flood during times of heavy rain are going to flood, but with the added danger of reaching some new records. Landslides on scenic Highway 1 are inevitable as they often occur on other roads that wind through the coastal range and the Sierra Nevada mountains.

Small towns and large cities all face the wrath of El Niño. We have been hearing from our users in Southern California as they prepare for rain and landslides. With its low-lying areas prone to flooding, the City of Long Beach has discussed with us their current process of cleaning 3,800 storm drains and ensuring its 26 pumps are in good condition and ready to move potentially large amounts of runoff. [caption id="attachment_1810" align="alignleft" width="392"]

Reggie Harrison, Director of Disaster Preparedness for the City of Long Beach, CA told us, "We are very concerned about El Niño. We will pre-load the priorities of the departments into the Veoci rooms, including Public Works, Parks & Rec, Fire, Marine, Lifeguards. We are setting up rooms with tasks that need to be done before the winter storms, like cleaning out catch basins and testing pump stations, updating documents and pictures of facilities for FEMA reimbursement, etc.  Veoci will be used to organize and accelerate these processes and ultimately better prepare us for the anticipated storms." A similar story emerges from Signal Hill, a small city located at the top of a hill in the greater Los Angeles area. In the 1500s, the Puva Indians used the hilltop to signal other native tribes on Santa Catalina Island, 26 miles from the shore. Because of its use as a signaling point, Spanish settlers called the hill "Loma Sental," which translates to "Signal Hill". Being a hill, it will have many of the problems hills often have in a very serious storm. Richard Johnson, Emergency Management Coordinator for Signal Hill, told us, “The City of Signal Hill is taking a very proactive stance in our preparations for this expected heavy rainfall event. We are a small city of 2.2 square miles and approximately 12,000 residents.

We need to track local conditions within Signal Hill, conditions with our adjacent municipalities, and conditions with our regional partners at the county. Veoci has certainly worked in each of those environments for us in the past. We are certain we will be able to maintain accurate situational awareness with Veoci during this anticipated challenge.” With all of the evidence to suggest that this year’s El Niño will be a serious one, our customers in California are wasting no time organizing plans and enacting preparation efforts.

With the help of our system, emergency managers, town officials, and response teams have a plan, and will brings those plans to action, aiming to ensure the safety of the people while minimizing damage to their communities.