El Niño On Track as One of the Worst 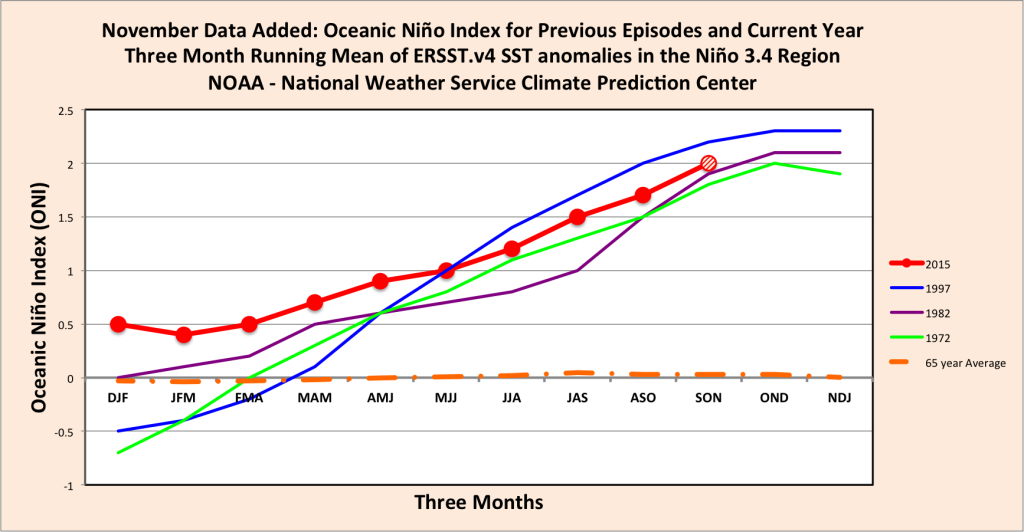 The November data for the Oceanic Niño Index is now in: this year is surely going to match the worst El Niños measured.

As if the data needed any validation, the weather patterns associated with El Niño have now showed up- a marked decrease in hurricane activity in the Atlantic and increased activity in the Pacific. As the hurricane season ended on December 1, the U.S. East Coast was relatively peaceful with only four hurricanes, none of whom merited the retirement of the name - an honor reserved for Katrina, Hugo and their kind. In contrast, this is the first year since 1971 that the Eastern Pacific saw  eighteen named storms, including 13 hurricanes with nine of them growing to major hurricane strenght. Hurricane Patricia was the strongest hurricane on record maximum wind speed recorded at 200 miles per hour and lowest air pressure at 879 millibars. Hurricane Sandra, which formed late in the season, was the strongest hurricane in the eastern Pacific with a maximum sustained wind speed of 145 miles per hour. Clearly, El Niño has made its presence known and the other correlated weather disruptions appear almost certain. As a calibration, here is an abridged summary of past El Niños:

With its region as El Niño’s biggest target, California is kicking their storm preparation into high gear. As a past victim to just about every natural disaster in the book, California is not one to wait around as potential floods, water shortages, electricity disruptions and evacuations take place. Last Wednesday, FEMA released a game plan for disaster preparation and response in anticipation of the heavy storms and rains likely to cause flooding and landslides, putting millions of Californians and their homes in danger.

According to FEMA, 20% of California residents live in a flood risk area, and the chance of an El Niño is now 95%. The FEMA game plan provides a framework for the coordinated response from all levels of government with tasks such as clearing storm drains, securing transmission lines and ensuring that road crews and emergency workers are ready to respond when a wet-weather emergency strikes. If you’ve read our previous blogs on El Niño, you’ll know that California’s ground soil is not at all in an ideal condition to accept the heavy amount of rainfall that is predicted. The wildfire-scorched and multi-year drought stricken earth is dry and hard packed and set up for runoff or “overland flooding”. FEMA notes that coastal areas could see tides up to 8 feet around Christmas and levee breaches, river swelling and rapid snow melt put the Central Valley at the highest risk of flooding.

FEMA’s plan also included the assembly of a task force of local, state, federal, community and tribal partners to assess El Niño-related disaster hazards and identify the populations that are most at risk. The regional Federal Emergency Management Agency in Oakland is conducting a dress rehearsal and releasing a disaster response plan for Northern California. Officials from many agencies will rehearse what would happen during an El Niño in order to make quick and intelligent decisions when the storms hit. Arizona and Nevada officials are developing similar plans to rehearse their disaster response.

On a smaller scale, individual cities and towns are using their own methods to ensure that their residents are prepared should El Niño bring disaster to their community.

FEMA says less than 20 percent of Americans have a plan for what to do before, during and after disasters that can leave them without power, heat and a way to evacuate the area. El Niño storms strike quickly, frequently and heavily and families, businesses and communities need to know exactly what they will to prepare for this year’s El Niño, as it doesn’t appear to be showing any mercy.   Resources: http://www.ocregister.com/articles/ni241o-695532-fema-rain.htmlhttp://www.claimsjournal.com/news/west/2015/12/11/267556.htm