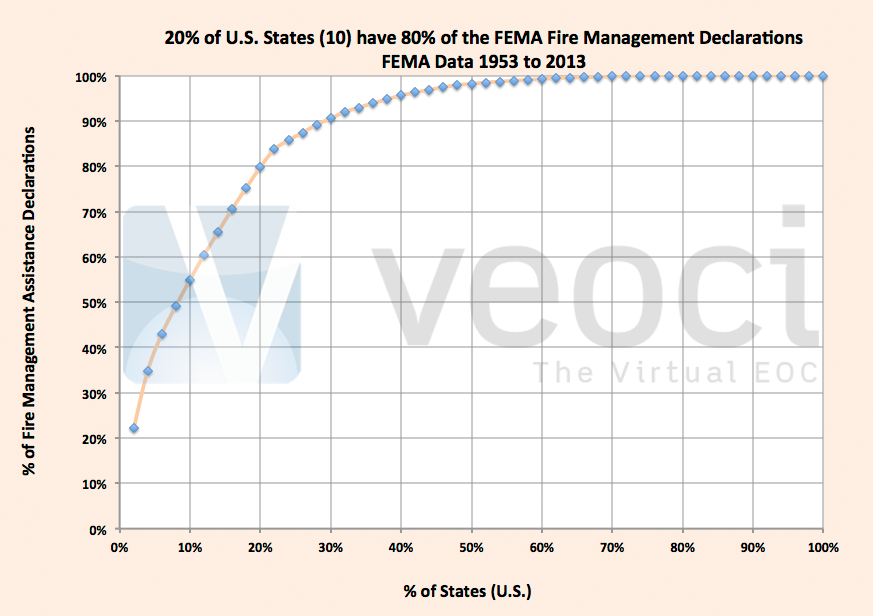 Vilfredo Pareto was an Italian economist and philosopher whose observation that 80% of the land in Italy was owned by 20% of the people eventually became the basis of the “Pareto Principle”.

Today, the principle is observed everywhere, everyday. Common examples include 80% of an equipment budget coming from 20% of the items; 20% of customers providing 80% of sales; 80% of value being achieved with the first 20% of effort. Often, when we deviate from the 80/20 rule, we suspect something has gone awry.

The Top 10 States (20%) with Fire Management Assistance Declarations that are responsible for 80% of the declarations are listed here:

As expected, with the exception of Florida, these states are concentrated in the western and southwestern United States, and form a continuous band from Texas to Washington in the Pacific northwest. Together these states account for 37% of the US population. There are fourteen states that have never had a fire emergency declaration in the sixty one years of FEMA records: Arkansas, Connecticut, Delaware, Illinois, Indiana, Iowa, Maryland, Nevada, New Hampshire, North Dakota, Ohio, Pennsylvania, Rhode Island, and Vermont. Another interesting way to look at the data is the distribution of Fire Management Assistance Declarations over the months of each year. Clearly, there are more major fires in the summer months, but fires do occur all year round. Over the sixty one years of data, December shows only 7 declarations while at the other extreme August had 185. For the Top 10 states, June was the worst with 147 declarations; all 7 in December were in the Top 10 states.

As a side note, for FEMA's Staffing for Adequate Fire & Emergency Response Grants for 2013, a total of $257 million was awarded for an average of $5.1 million per state. Of this, 47%, or $121 million, went to the Top 10 States making Fire Assistance Management Declarations for an average of $12.1 million per state, while states with 0 declarations got only an average of $2.3 million each. Surprisingly, amidst all the the complexities and complications in how these grants are awarded and who applies for them, 20% of the states received 79% of the grant money - Pareto strikes again!