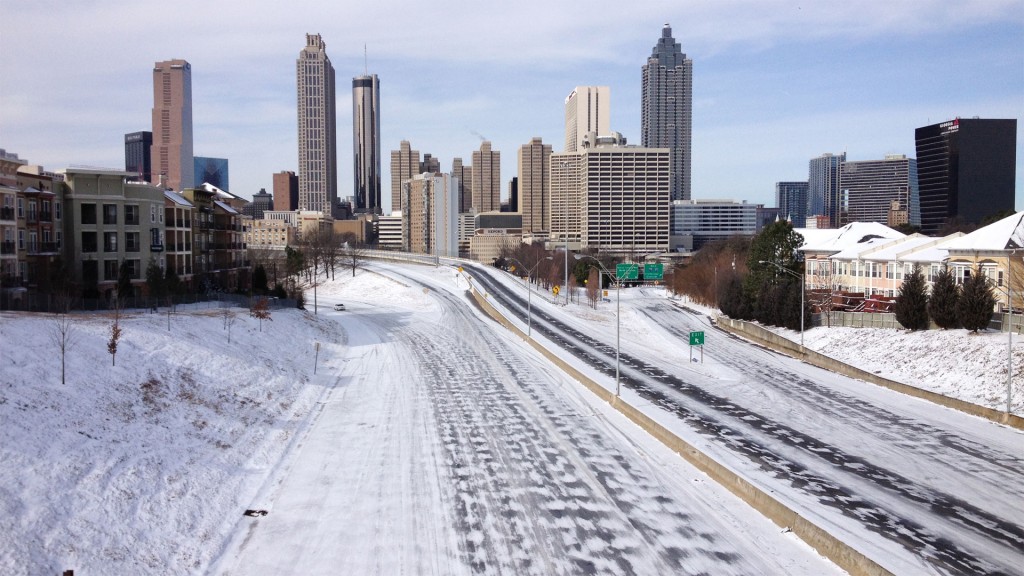 Atlanta, GA recently endured a rare snowstorm (Jan. 28, 2014) that left thousands of commuters, school children, and others stranded throughout the city, trapped behind a surge of traffic, accidents, and deserted vehicles.

Headlines ranged from dire warnings of the area’s complete paralysis to jokes about Southerners being unable to handle a little snow, but a closer look can give us all a little information on how to deal with the unexpected. Ultimately the question everyone was asking was: "Why did a couple of inches of snow bring a major metro area to a halt?"

(credit: CNN) The consensus seems to be that Atlanta was underprepared and didn’t mount an effective response to the storm, and indeed a number of leaders admitted failures. An initial analysis points to two simple causes - preparations weren't launched early enough, and more should have been done to reduce the amount of traffic on the roads (by closing schools from the get-go, and staggering when to send people home from work). These causes can be addressed easily enough if properly incorporated into the response plan for the next storm. Digging even deeper, though, it's clear that Atlanta faces some very complex problems that do not have easy solutions. Chief among these are:

Both of these factors add up to a situation where any disruptions - caused by snow storms or otherwise - could have an inordinately high impact (and high visibility) in comparison to other cities.

Handling crises that fall outside the 'norms' of what a city/region is used to responding to will always have unexpected consequences. The All-Hazards preparedness plan from FEMA is a good starting point, but in real-world scenarios we can find ourselves unprepared for those things that aren’t in what you might call the 'regional hazard lexicon.' When things go wrong, one thing that can be controlled is the official reaction. It's easy to go for political points by shifting blame when under fire, but it does not solve the crisis at hand. It is commendable that Mayor Kasim Reed and Governor Nathan Deal showed a united front in the face of a rapidly worsening situation and handled themselves and the media in a very professional manner. By saying "the buck stops here", the Governor prevented energy from being wasted on finger-pointing and directed it towards learning lessons and making improvements for future incidents. And let’s keep in mind, improvements have been made since the last comparable storm in 2011.

There is a reasonable expectation that Atlanta cannot spend its entire public works/emergency management budget on snow removal and sanding equipment. Mayor Reed’s statement that “we’re better prepared now than we were in 2011” is correct. In the period since then, the city gained between 30 and 40 pieces of equipment to deal with snow and ice, among other infrastructure additions and improvements. Critics say that is not nearly enough, but the flip-side is to overspend on resources that may only be used once every few years.  It's a delicate balance made more complicated by the fact that there is no private fleet that can be called up on a per-incident basis to help. In the Northeast, for instance, there are many privately operated snow removal operations which supplement the public snow management fleets already in place and therefore do not impact the taxpayer in anything but extreme cases.

Governor Deal stated that "the region's greatest failing" was "timing". What does this mean beyond launching response plans earlier and staggering commuter let-out times? Does fixing this include increased collaboration among Georgia's region to share resources? Does it mean better communication between state and local agencies, as well as with businesses and commuters? This is a great lesson in the importance of an All-Hazards, whole community approach. Here are some vital aspects to handling extreme incidents:

Atlanta and every other city and region present particular sets of challenges, unique to their geography and populations. It's imperative to develop long term plans that can help reduce the impact a storm or any other weather-related event can have, and not just beef up the response capabilities.