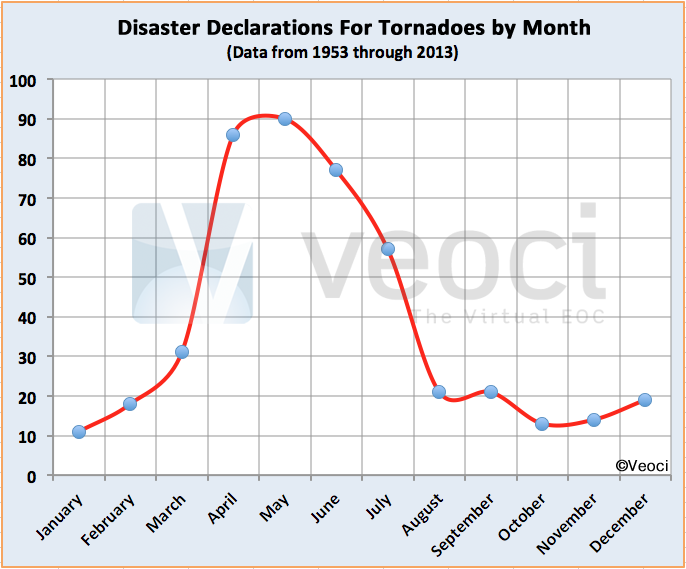 In recent years, adventurous coverage of tornadoes on television has made us all aware of the devastation they cause. The summer heat over a large landmass spawns more tornadoes in the US than in any other country. FEMA has made available records of Major Disaster Declarations for Tornadoes.

These are tornadoes that caused damage that went beyond the capabilities of local and state authorities to address, and a Presidential Disaster was declared. [see "Sixty-One Years of Disasters & Disaster Declarations – Some Basics"] The total number of tornadoes over the sixty year period since 1953 is in the thousands – those in this FEMA data base are just the most devastating ones. Many of the tornadoes not included in these statistics also caused serious damage and loss of life and this data should not be interpreted as a comprehensive list of all tornadoes. The data surprisingly shows that major disasters due to tornadoes have been declared in 42 states. Tornadoes have also occurred in every month – from January to December.

The following graph shows the number of major tornadoes that were severe enough to warrant a Presidential Disaster Declaration, by month:

Tornadoes occur most frequently and with greater ferocity in the middle of the continent and in the early summer months. The following table shows the major tornadoes by state and by month. The color code with a number indicates the number of Presidential disaster declarations for that month and for that state for the years from 1953 to 2013.