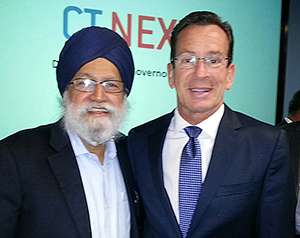 On Wednesday the 16th of October, Gov. Dannel P. Malloy of Connecticut and the commissioner of the Department of Economic and Community Development, Catherine Smith, met with nine local entrepreneurs with companies in the post-seed stage.

The discussion focused on possible ways to improve Connecticut's track record for creating new jobs (admittedly not the best), and seeking feedback from startups who've benefitted from programs designed to grow employment in the state. [caption id="attachment_323" align="alignright" width="300"]

Dr. Sukh Grewal & Governor Dannel Malloy[/caption] Connecticut has in place one of the most advanced public incubation systems for startups. Claire Leonardi leads the Connecticut Innovations team, which provides equity funding ranging from $25k to $5M. For larger amounts and other financing options, Catherine Smith and the Department of Economic and Community Development step in, often partnering with Connecticut Innovations. Various incubators are located around the state. There are tax credits and funds for on-the-job training. There is help to find rental space and wet labs. At this time, the state has helped 900 or so companies, with a success rate of over 90% (based on how many have folded in the past three years). Clearly a good sign for anyone thinking about making Connecticut their business's home. We're not just talking about info- and bio-tech companies, either.  The startups at the meeting represented quite a diversity.  One company is setting up charging stations for electric cars in parking garages.

Another has the brilliant idea to retrofit oil heat furnaces for significantly higher efficiencies. Yet another has a microchip to detect minute quantities of all types of chemicals. So with all this talent and innovation, how do we spur job growth? Overall, the entrepreneurs in the room had a hard time coming up with what else the state could do from the financial side - clearly a lot has already been done - though there were some suggestions:

As the top state in per capita income, the second most educated state in the country, the home of world-renowned universities, and with a multi-billion dollar investment in schools and community colleges, Connecticut is an ideal incubator. Couple that with the promotion of innovation, entrepreneurship, and attracting the right people, and startups should be able to play a fundamental role in improving Connecticut's job growth rate.

For us here at Veoci, it's abundantly clear that Gov. Malloy and the State of Connecticut are here to help companies like us grow. Two years ago, when he stopped by our offices in New Haven, we had six people. He was happy to hear that we've now got 15 employees. We plan to continue providing a positive example of how startups can succeed in Connecticut. -Dr. Sukh Grewal, CEO Grey Wall Software, developers of Veoci