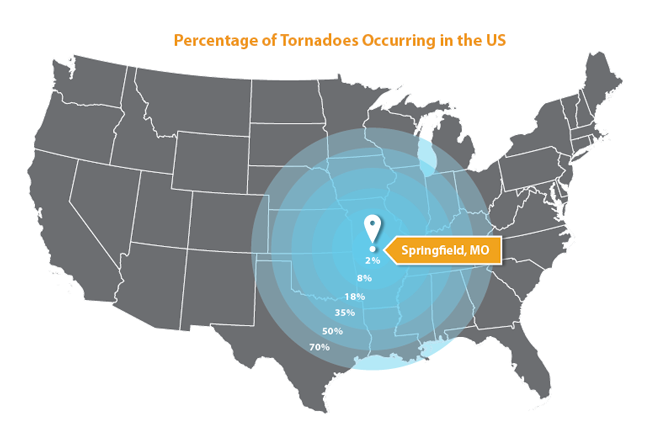 From the data for all recorded tornadoes since 1950* (over 57,000 recorded), it appears that the tornado center of the United States is on State Highway 60, twenty miles east of Springfield, Missouri (pop. 159,498).

Springfield is located in Greene County in the Ozarks. With 34 Tornadoes in the past 64 years, Greene County is NOT the tornado capital of the US, nor does it even come close to equaling the counties with the most tornadoes. It just happens to be the geometric center of those that occur in the US. It does have the distinction of landing one EF4 in 1991 that left two people dead and sixty-four injured.

Other averages from this compendium of over 57,000 documented tornadoes:

Average date and time of occurrence: June 13th at 3:33 PM

Of all the tornadoes, only 453 crossed a state line!

(This data excludes the 40 tornadoes in Hawaii and four in Alaska.)

*The data here are taken from the Tornado History Project a free, searchable database of all reported U.S. tornadoes from 1950-2013. There are over 57,000 tornadoes currently in the database, each with its own map and forum.

The project's main goal is to combine historical data with user submitted items (eyewitness memories, photos, videos, etc...) to recreate the history of as many tornadoes as possible. Joshua Lietz conceived and developed the Tornado History Project.  http://www.tornadohistoryproject.com/about