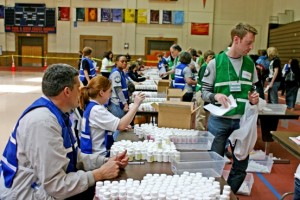 It is difficult to forget what became of the worst biological attacks in U.S. history as letters laced with anthrax began appearing in the U.S. mail very shortly after the 9/11 terrorist attacks.

With five Americans killed and seventeen sickened, it pinpointed a vulnerability in our national defense: the ability to respond quickly to control a deadly emergency with the mass delivery and dispensing of an antidote to the deadly agent. Several initiatives were launched to develop and test the logistic processes of getting the curative agent distributed for eventual application to millions of people. Last August one of the large metro areas in the US launched a program to simulate the response to immediate threats to the public such as a deadly disease outbreak or the release of a biological agent, such as anthrax, in a setting where the spread of the agent could be rapid and difficult to control. The process tested was the delivery of specific and necessary life-saving vaccines, antibiotics and medications to Points of Dispensing (PODs). From the PODs, these antidotes or vaccines are rapidly dispensed to the public by local health professionals. The overall process is also known “mass prophylaxis”.

What happens during the exercise?

During the exercise, more than two dozen PODs were set up throughout a large-scale area and for a more accurate measure of the process, the exercise was initiated without warning. Over a thousand staff were deployed to set up the PODs and command centers. PODs in a box (PIBs) containing necessary equipment such as flashlights, radios, batteries, signs, instruction forms, and other items to aid in emergencies. The necessary medications arrived later for distribution to the PODs in a mass shipment from the Center of Disease Control and Prevention (CDC) in Atlanta. The exercise is deemed successfully completed after all 30 PODs report that they are equipped and ready to open and serve the public.

The Center for Emergency Preparedness and Disaster Response (CEPDR) at the Yale New Haven Health System initiated the design of the exercise and was engaged to observe and record the activities at each of the PODs. In turn, five members from Veoci representing Yale were located at various POD locations in the same role. The CEPDR team decided to use Veoci as the platform for communication and for recording their observations.

A CEPDR representative and controller was able to communicate observations, notes and status updates quickly with Veoci team members via Veoci’s virtual EOC software. Utilizing Veoci’s discussion threads and side rooms pertaining to operations, members were able to ask each other questions, share photos and exchange important information in real time from the perspective of the lead controller in the exercise. Notification of both PIB and medication arrivals and assessments of staff performance were among the information exchanged in the virtual discussion rooms.

Veoci’s cloud-based technology allowed real-time communication quickly and efficiently as well as portably with Veoci’s mobile app so team members remained in contact wherever they went. In times of life-threatening emergency such as this, it would be easy for miscommunication or panic to ensue with all of the various aspects such as medications, paperwork and PIBs involved in handling such a large-scale crisis. Veoci team members participated in the exercise in order to test the product's ability in a mass prophylaxis process. With constant and immediate updates, Veoci team members were able to utilize their product and prove it valuable and useful in such a large-scale and time-sensitive operation as this.