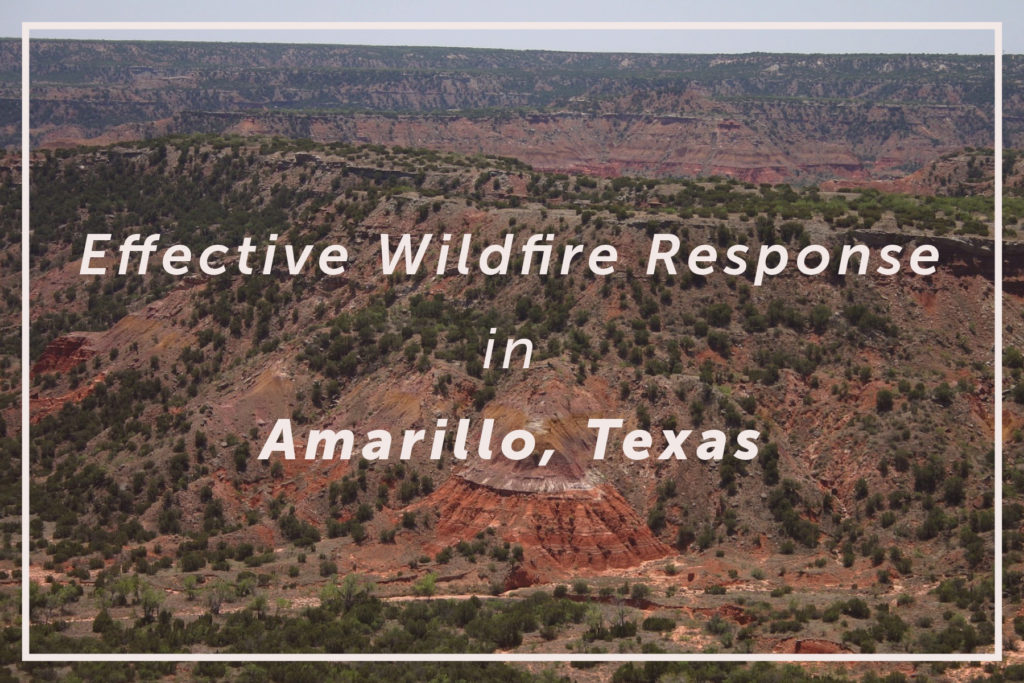 National Wildfire Awareness Month kicks of this week, with May 5th being national Wildfire Community Preparedness Day. It's a great reminder of how important it is to be ready for these incidents, especially with the hot and dry summer weather around the corner. According to the National Interagency Coordination Center's 2017 Wildland Fire Summary and Statistics Report, 71,499 recorded wildfires burned about 10 million acres throughout the country in 2017. Wildfires are actually fairly common in the U.S., and they occur throughout the entire country.

The same National Interagency Coordination Center report showed 9,827 (13.7%) of those fires raged through Texas alone. Wildfires in Texas should be no surprise though—just like the rest of the Southwestern U.S., Western Texas’ climate is very dry. The region’s dehydrated environment, plus the arid air and whipping winds, let single sparks and embers transform into strong fires.

How Amarillo Responds to Wildfires

Chip Orton, CEM, TEM, and Director of Emergency Management for Amarillo, Texas, has years of experience responding to wildfires. His office is responsible for the city of Amarillo as well as the surrounding Porter and Randall counties, all of which are situated in the heart of the Texas Panhandle. With how rapidly fires can start and spread in this region of Texas, emergency managers like Orton need to be as prepared as they can be for these incidents.

One recent event emphasized how critical preparation for wildfires is in Amarillo. A blaze engulfed a mile of Amarillo within 10 minutes in the middle of March 2018. This fire, named the  Ninth Avenue fire, started from a downed power line and quickly spread due to 55 miles-per-hour winds. Fortunately, no one was harmed and no structures were lost in the fire, but it was on the edge of the city’s medical district at its height. Without a swift response from local fire departments and the Amarillo Area Office of Emergency Management, there would’ve been much more damage.

In a recent webinar, Orton discussed how his office uses Veoci to respond to wildfires in its jurisdiction. How his office and its partners put together such effective responses to wildfires, like the Ninth Avenue fire, became clear once he walked through his processes. It starts with notifications to the team, a quick fix for getting everyone alerted to the situation. Then the response kicks off from there.

Orton’s office tracks each of the year’s wildfire events within a room, with threads dedicated to individual fires. Communication and collaboration are key elements in wildfire responses, and, with this method, they’re easy to establish. Developing full event reporting within the threads not only keeps each partner informed, but serves as a dynamic timeline of the fire’s progression. Team members can submit comments with any relevant information to the thread for the rest of the team to see. Even remote team members can secure a sense of the situation. As a fire develops, team members post pictures with GPS coordinates to the thread as well.

Visualizing: The Role of Maps

The office also tracks fires in Veoci with built-in maps. Visually indicating a fire’s burn area contributes to a stronger sense of situational awareness, and by using map overlays, the partners achieve this. As the fire develops, the team adjusts the overlays to their present understanding of it. This creates an accurate picture for real-time response and after-action analysis.

A fire’s burn area isn’t the only information the team captures in the map overlays. The after-action analysis continues into damage assessment. Icons and overlays in the maps have forms tethered to them for capturing data, such as levels of structure damage. And, with color coding, it’s easy to assess an area with a quick glance at the map.

Preparation and Information: Drills and Forms

Recently Orton’s office conducted a full-scale drill, one for an incident at the neighboring Pantex campus, the only authorized assembly and disassembly plant for nuclear weapons in the country. It’s clear how involved a drill (or plan) like this is from the context alone. And it proves just how important the robust mapping features are to incident responses. After showing the map, filled with overlays and information, Orton said he was able to “do this all in 4 minutes and share it.”

Forms play a large role in the office's response. Data informs every response, and especially wildfire responses. Forms are fully customizable, allowing the office to collect specific information with different configurations; for example, Orton’s office uses a number of forms, including

With all the data that can be pulled in (or sent out) with forms, incident response becomes an extremely efficient process.

It’s best to be prepared for all types of incidents, and especially for such destructive events like wildfires. The full webinar goes into more detail about Orton’s plans and practices; if you’d like to see it, contact us to request a recording of the webinar.

Special thanks to Chip Orton, CEM, TEM, for hosting the webinar, his help in writing this, and sharing his knowledge with the community.

Mr. “Chip” G. K. Orton III has over fifteen years of emergency management experience and is currently the Director for Amarillo Area Office of Emergency Management, an interjurisdictional emergency management program covering two counties and two cities in Amarillo, Texas.  Mr. Orton holds a Bachelor of Science in Emergency Administration and Planning from the University of North Texas and should complete his MBA from West Texas A&M University in Summer 2019.

He served four years in the U.S. Coast Guard in telecommunications / cryptography and was a 911 operator / dispatcher for four years.  Mr. Orton has worked in specialized fields such as floodplain management, public health, hospital / EMS, non-profit organizations and local government.

Mr. Orton is also a board member of the Information Technology Disaster Resource Center (ITDRC), a 501(c)(3) non-profit public charity based out of Fort Worth, Texas that is comprised of Information Technology Professionals; organized in 2008 to provide communities with the technical resources necessary to continue operations and begin recovery after a disaster.

Mr. Orton dabbles in graphic and logo design, is an avid reader, and loves to travel.  He lives in Amarillo, Texas, with his wife of 9 years, Rebecca, 4-year old son Jake, and their cat Cheese.

See what you can do in your community for National Wildfire Awareness Month. There's a lot just one person can do, and even more a community can. Get your town together to prepare future wildfires.