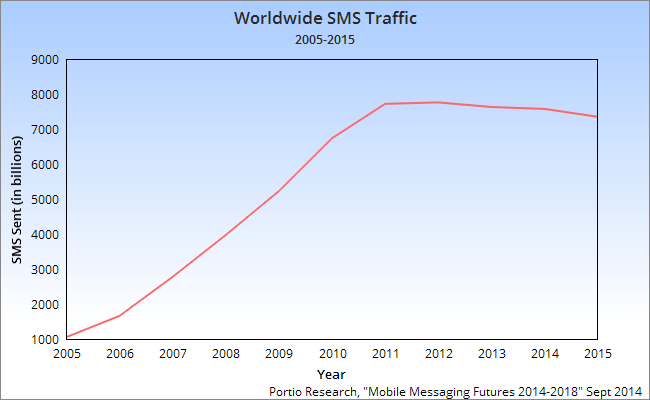 Just about everything we do begins with a conversation. And when doing those things, there are more conversations every step of the way. When we began working on collaboration and work processes 15 years ago, given the limitations of technology at the time, we did not have a well-developed conversation system.

The age of messaging (close cousin to conversations) had just begun and one of the corporate standards was SameTime - a startup from Lexington, Kentucky that IBM purchased. The world of APIs and interacting applications on the web had not arrived and SameTime usually lived in its silo. As we developed the work process and collaboration model, we did not have messaging. Other products, SalesForce for example, had no messaging for years.

SalesForce appended “Chatter” to its product line in late 2009. Five years ago, as we began our new journey with VEOCI, text messaging was taking off. The cell phone companies grew with SMS, added pictures, and the exponential growth began.

The world of “Mobile Apps” took off as well and web messaging, or Over-The-Top (OTT) messaging apps like WhatsApp and Kakao Talk worked around the SMS charges by using the data plan. As you can see, while SMS began to lose momentum, OTT apps began to accelerate. The next step of course was to add this functionality to applications.

So, we took that idea of conversations and developed it for working teams. We began with conversations, not just about our new product, but in our new product. The backbone of our product, VEOCI, is messaging. Given the phenomenal growth of messaging, this strategy was a no-brainer. At work, conversations can both help and hinder progress - no one wants to get bogged down by multiple threads and scattered thoughts on a project. The complaints about email highlight aspects of communication that users find irritating - SPAM for one. Veoci consolidates and organizes conversations via messaging, email, and insider work processes and into a truly useful tool - an integrated part of getting work done.With a patented structure, Veoci also does not suffer from external SPAM while managing conversation threads with the ability to rearrange and delete as needed. Objects such as files, photos, videos, forms and work flows all appear in logically combined and organized streams.

With messaging (chat, texts, groups, etc.) becoming the dominant mode of communication these days, it’s common sense to let people converse that way at work, too. VEOCI does just that and not just with spontaneous "water cooler" conversations but as an integral part of work processes and projects.