New Data Is In: El Niño Ties as the Worst Ever Recorded 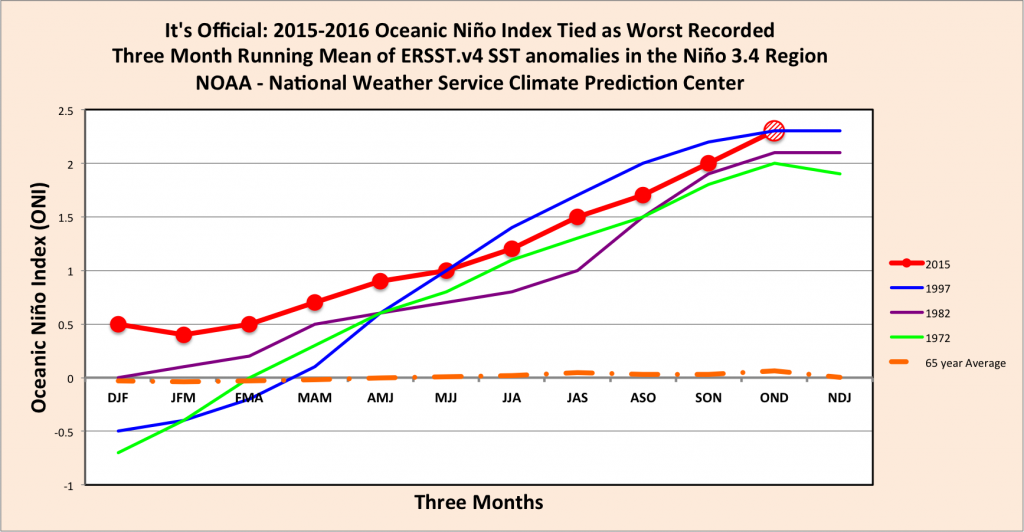 The latest NOAA data is in and the 2015-2016 El Niño is now officially tied with the 1997 season as the worst El Niño in recorded history.

The two phenomena share the signature sign of a large, powerful El Niño: unusually high sea surface heights along the equator in the central and eastern Pacific. This is an indication that a thick layer of warm water has covered the ocean.

El Niños are triggered when the usually steady, westward blowing winds in the Pacific die down or change direction, causing the dramatic warming of the upper ocean in the central and eastern tropical Pacific. Storms follow this warm water, pumping heat and moisture high into the atmosphere. This is what affects storm paths all over the world.

What is the impact?

This year’s El Niño has helped seal 2015’s position in the record books at the world’s warmest year. If you are currently residing in Southern California you may be used to warmth, but your umbrella is probably getting more use than ever before. Although heavy rains have brought relief to this severely drought-stricken area, they’re also causing flooding, strong winds, high surf along the coast and increased concern for mudslides. Globally, the disruption of usual storm patterns is causing major flooding, droughts and food shortages. Southeast Asia’s rain has been undermined in El Niño’s path, reducing rainfall over Indonesia and causing massive wildfires and blankets of choking smoke all over the region.

El Niño has also brought on Indian heat waves due to a delay in their usual monsoon rains by 15% with more monsoon reduction expected for Brazil and Australia, coral bleaching damaging coral reefs in Hawaii and the Caribbean, flooding in South America, droughts in South Africa leading to around 31 million people facing food insecurity across Africa and more food shortages expected to hit the Caribbean, Central and South America and a record-breaking hurricane season in the eastern tropical Pacific. Production of rice, wheat, coffee and other crops all over the world have been hit hard by droughts and floods. Overall, the main message here is “Be Prepared,” it does not look good. References http://climate.nasa.gov/news/2382/ http://www.bbc.com/news/science-environment-35159826

January is a key time for many emergency managers in higher education (and other industries). Your budget will soon be due, and it’s time to consider how your department’s funds should be spent. If you want new tech or just resources to help your program grow, now’s the time to push for them. Getting those resources depends, however, on strategically constructing your budget.